Lea is also an alien and at first she did not have much contact with us, however, as time went on we have had more and more contact with her. She is short in stature, about five feet in height. She has very, very black, shiny, straight hair that is cut short, all one length and she tucks it behind her ears. Lea's ears are more elongated and pointed than our ears; they look somewhat similar to Spock's on Star Trek. Her skin is olive color, which makes her Greek looking. The eyes are the same color as her hair but instead of round centers round centers she has yellow pupils that go straight up and down. She is of average weight for her height. She has a nose that is quite long and narrow and full lips we would probably say are a little large for her face by Earth standards. There are four appendages on each hand that are finger like. Each is different in length, and one finger is a little offset and works much like our thumbs. Lea doesn't have fingernails and we told her how some people use them for screwdrivers, she laughed at the thought of that. She has had pizza because I suggested she try it. On board the ship she said there are more hot drinks than cold ones.

Lea's figure is straight up and down, not curvy like Monn's. For clothes she wears a robe with a hood and a sash at the waist. The robe is dark brown in color. The coverings for her feet look a lot like our summer sandals, but I don't know what material they are made of. Lea looks to be about 35 years old by our standards, although her species has an average lifespan of about 300 of our years. An accident can shorten their lifespan but they normally just go to another existence when their mission or life is over. 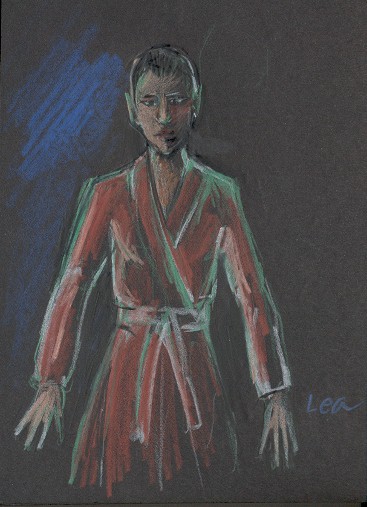 This is an artist's rendition of what Lea looks like as described by Lea herself.
drawing by A. Aquino 11/14/01

She does not have a home planet because she was born on board a ship in space. Right now she is stationed on a ship that is twenty-four miles across and about thirteen stories tall. This does not include the boarding and docking areas and the command center. It is smaller than the Peace Ship. The ship was constructed in space as it is easier to construct such a large object there.

The reason that she communicates with us is because Dale who is a member of our group is on loan from the Christ Command, the same command that she is in. Lea explained that the ship's commander is the being we call Jesus. "He knows all and sees all that are under His command. Let me tell you that if you are a light worker, you are known to this being. He has compassion for everyone big and small. My immediate boss is third in command on this ship; she is the top female officer. I am between the officers and the personnel and have all the problems from both sides that have to be handled. All days on our ship start with meditation and end with meditation, no matter what shift you're on or what your job is. Right now there are many commands near earth working to help the planet and humanity."

Lea says they are here because of the evolution of the planet and to keep track of things as they progress. This includes raising the vibration level of the planet and hopefully raising the vibration level of humans. The group she is with has already prepared space ships for evacuation. The ships are ready and in place to do that job. Plants and animals are already on board and waiting so that earth can be replenished if necessary.

Her main job is what we would call a psychiatrist or psychologist. When she does her work, she blends with the patient's mind and soul so she knows exactly what the problem is. In other words, nothing can be hidden from her and the job of fixing the problem is accomplished very quickly. Lea readily admits that she does not get to work with humans as often as she would like to, so she does not know much about us.

For a long time Lea had the use of a small craft for shuttling dignitaries from her command. She explained that her small ship "has a crew of seven plus myself, it could be used for evacuation of ninety-two people for only a short distance because there would be a problem with the breathing of the air. It would only be used to get people to a larger craft. My ship is quite large. It is approximately three of your stories tall. It is 120 feet across and I think you would call it a disc shaped. Some of the older ships were bell shaped but now they have a much sleeker style."

Lea's species do not marry as we do on Earth. They blend with each other because then they know everything about each other. (This is not a sex act.) When they do that they then decide if they want to spend a lifetime together. If they decide to stay together they go before God and make that commitment. They usually do not have children if they are on a mission or stationed in space because they feel it is irresponsible to have children only to go off and leave them.

She vibrates at a much faster speed than we do. That means that the pressures and gravitational pull on earth is greater than she is used to. It is very hard for her to operate on earth and she cannot stay on the planet for any length of time. Her oxygen mixture is different than ours and it is hard for her to breathe on planet earth.

Lea is a very serious person. She is all business and there is no playing around in her presence. Her job is very serious and her posture and nature reflects that. Lea has shared with us information about our Bible, their religious beliefs, our religious connection to the aliens and how all these fit together.

In 1990 Lea told us more about her job. "The job of our command is to make sure the planet gets back to the condition it was intended to be in. That is the good side of our job. The bad side is waiting around up here in space. Part of my job is to move the dignitaries of our command safely to wherever they are needed."

Much later she got a new ship that will be used in the evacuation of humans from our planet. The new ship is seven stories high and approximately 2.4 miles across. The ship can house 1,700 people on board plus crew. Because there is not enough area for food growing or regenerating ability, these people cannot stay for an extended period of time. There are 73 shuttlecraft on board which take only one pilot to run. With this ship she can come as close as 22.3 miles to the surface of our planet. As you can see, the aliens have more than one job because in space you never know where or what skill will be needed.

In September of 2001 while talking to Lea she surprised us with these statements. "My new ship is the Ship of Hope, that is what it translates into in your language." A short time later Lea quietly admitted, "I had a slight accident with the new ship I was commissioned to pilot. It wasn't a bad accident just a few bumps and bruises that's all. I bumped into the Christ Command's lead ship with my Ship of Hope. I wasn't paying attention, just thinking about how I would explain to all of you about Moses from your Bible."

"I do have to pay for the repairs on the ship out of my salary. I can pay for it because we don't have many expenses in space, but I will be wearing my brown robe for some time now; no new ones for me. We don't have money like you do. We are given something like credits for our service which we can then use to buy the things that we need."

"I would like to explain to you that when Moses came down from the mount and he saw the people worshiping idols instead of God he became angry. Just as he is very angry with what's going on in the world today. He is in the flesh form just as Jesus is and he visited Earth on, let's see ... it was December 17, 2003. He actually came to the planet and he visited the Far East, because he can blend in with the people there quite nicely. He came back very angry and gave his report to Jesus and I have not seen Jesus cry in a long time. But there were tears in His eyes as He heard the report about all the atrocities that are happening on the planet."

Back To Lea's Perspective